Guchi and I didn’t have any plans yesterday evening, so we decided to check out the different GITEX exhibitors at the Airport Expo. Since we knew that the parking spaces would be full at the venue, we decided to take the metro instead; anyway, a free shuttle bus would be at Rashidiya Station (the last metro station) to take the GITEX-goers to the expo, so at least we didn’t have to worry about traffic or difficulty going there. But, if only it were that simple...

Metro to GITEX. We got on the metro at Khalid Bin Al Waleed Station alright, passing through all the stations until GGICO. But then, when the train approached the Airport Terminal 1 Station, we heard an announcement that everyone had to alight the train and transfer to the other platform. So we did. As soon as the train arrived, we boarded it, along with the other passengers. And then, instead of heading towards Airport Terminal 3 Station, it went back to GGICO Station. Everyone was surprised. None of the train attendants (or whatever you call them) were there to answer our questions. As soon as the train stopped as GGICO Station, a number of passengers got off, asking the attendants at the station what was happening (Guchi and I stayed on the train with the others). We could see that even they didn’t know what happened (or they were explaining, but they also seemed unsure). And then, the doors of the train closed and once again, we were heading towards Terminal 3. It stopped somewhere in between GGICO and Terminal 3, and then we were heading back again to GGICO. No one went down anymore when it stopped, but there were a few passengers who boarded. And then, surprisingly, we were heading back to Deira City Centre! By this time, the people (who were most probably going to GITEX) were getting confused and angry. We couldn’t find anyone who could give us a straight answer as to what was happening or where exactly we should go to get a ride to GITEX. Anyway, once we arrived at Deira City Centre Station, hubby and I got down and went to the other platform for Rashidiya. As we did earlier, we boarded the train and rode it with no problems…until we reached Terminal 1 Station where we heard the same recording that it was the last station and everyone had to alight the train. There was an attendant on the train who informed the passengers that upon exiting the station, there would be shuttle buses that would take the people going to Terminal 3, Emirates Station, Rashidiya Station and GITEX for free. We were thinking that finally, someone was giving us a clear idea on what to do. So, we got off the train (again!), and we were almost about to check-out our cards when we heard some station attendants directing the people to the other platform (the one where we got on the train that took us all the way to Deira City Centre). We didn’t know who to believe! Finally, hubby and I decided to follow the station attendants and go to the platform where they were directing us, and if we end up at City Centre again, we would just go back home. Fortunately, there were about 5 attendants at the platform who knew which trains would go to Rashidiya and which would go back towards Jebel Ali. As soon as they announced that the train that arrived would head towards Rashidiya, everyone made a mad dash to get in. It was like the LRT and MRT in Metro Manila! Finally, we were on our way to Rashidiya. And as announced earlier, there were shuttle buses that were waiting to provide free transportation to those going to the exhibition. As expected, the buses were full, but since we were a few of the first ones to get in, Guchi and I were able to get seats.

GITEX at the Airport Expo. The entrance ticket was Dhs25 each, with a raffle coupon attached. There was just 1 ticketing counter, but even though the queue was pretty long, it was moving quite swiftly. Upon entering the exhibition hall, there were so many booths and stands with people handing out leaflets and brochures to everyone, but we just ignored them and tried to find one that could give us a pen. Finally, we found the stand (or whatever you call it) where the people can fill up forms, tickets, and raffle coupons. While I was waiting for Guchi to fill-up our coupons, an Emirati man was walking towards where we were and I saw that he had bought so many stuff that it filled an entire trolley. Anyway, all of a sudden, he stopped and gave me 2 Panasonic coupons stating that the bearer won a shirt and a pen. He said that I could have them because he didn’t want them. I was surprised, but, hey! a free gift is a free gift…and he gave me two, so I thanked him and accepted them. When Guchi finished completing the details on the raffle stub, we headed to the drop-off box. There, a lady was offering people to have their photos taken and printed on a shirt for free. Since we’re both suckers for freebies, we filled up the form and got ready for our photos. Once they confirmed that we were satisfied with the shots and they got the sizes of our shirts, they gave us the claim stubs saying that we could collect the shirts after an hour. After that, we just went around the hall, checking out the different gadgets. There were so many stands, so many people pushing and shoving, and so much noise! Going around, we were able to get the 2 prizes from Panasonic, a few pens, 2 computer games, a magazine, the shirts with our photos, a notebook, mousepad, id lace, refrigerator magnet, and a pin button. We also got to have our picture taken in Charged’s giant Nokia photobooth and browse the net for a few minutes at Etisalat. By 9pm, we decided that we had seen enough, so we headed out to the exit for the shuttle bus that would take us back to Rashidiya Station.

On the Way Home.Guchi and I settled in our seats while waiting for the people to keep piling in, until the driver decided the bus was full enough to depart. At the metro station, we were directed to the platform that, on normal days, all the passengers get off. But since the metro was out of whack that day due to some technical problems, this is where the passengers would be boarding. When the train arrived, again, everyone rushed in. There was a family (father, mother, kid and baby) who was riding and the baby was beginning to cry, so the mother tried to pacify her. Anyway, everything was ok, until the train approached Airport Terminal 1 Station where we heard the announcement that everyone had to alight the train and board on the other platform. So we did (again!). Fortunately, there were station attendants there who explained and directed to us which train we should board, so that we wouldn’t have a repeat of what happened earlier. While waiting on the platform, we could hear a Chinese lady on the speakers making some announcements in English, but her accent was so distinct that we could barely understand what she was saying. In the train, we rode with the same passengers, including the family with the crying baby. Yes, she was still crying…and we could hear her going on even when Guchi and I went off the train at Khalid Bin Al Waleed Station. We could see that the mother was already embarrassed with the way her baby kept wailing non-stop, but she was just holding her. She didn’t take out a bottle of milk, or a pacifier, or a toy/rattle, or even speak or sing to the baby to shush her up. All she did was carry her, pat her back, and wipe her nose (I think the baby had a cold). But what really shocked hubby and me was the fact that the father wasn’t helping at all! He was seated beside his wife, but he was just looking at his other kid or at the other passengers. There was one time when he tried to carry his baby, but after just 10 seconds, he gave her back to the mother. My gosh! I don’t know what nationality the family was, but I’m glad they weren’t Filipinos.

So, that’s our GITEX experience. Even though Guchi and I have lived in Dubai for more than 6 years already, this was our first time to actually visit the annual exhibition (kinda embarrassing, huh?). But the thing is, since everyone knows that it’s GITEX Week, all the stores that sell electronic gadgets participate and they also put their items on sale or have some promos. So technically, you don’t really need to go to the exhibition, you can go to Sharaf DG, Jacky’s, Plug-Ins, Jumbo or any other store in Dubai. Most probably, you’ll get the same thing for the same price that it’s offered at the exhibition (with the freebies)...less the pushing, shoving and almost deafening noise. However, if you don’t mind the chaos and you want the other freebies and giveaways, then by all means, head on to GITEX. It’ll be an adventure! 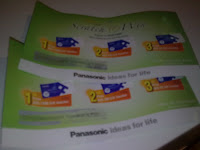 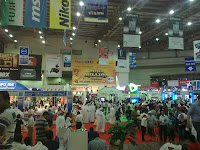 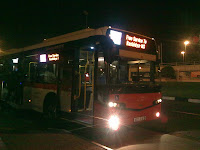 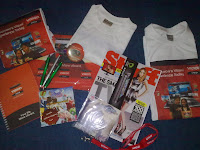 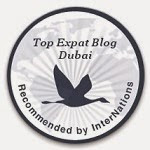